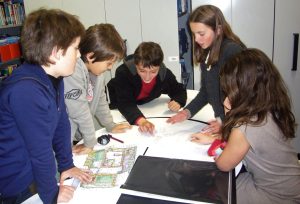 Interviewed by the Age Newspaper for an article about Australian children’s play traditions, play specialist Judy McKinty highlighted ‘…the strong relationship that can develop between play and place, and the rich play and learning experiences that can emerge when children feel a sense of ownership of their playground and are allowed to play freely among themselves’. (The Age Newspaper, 1 August 2011)

Judy McKinty had been commissioned by Princes Hill Primary School to undertake a playground survey to be used to develop the school’s masterplan. Her observation, in reference to an existing play structure within the school grounds, would resonate powerfully when a group of Year 6 students in collaboration with teachers, parents and a landscape architectural company set about designing and replacing a much loved but now demolished senior adventure playground.

The original playground had succumbed to years of wear and tear but the substitute play equipment did not measure up in the eyes of the children. ‘The children expressed a deep sense of loss and anger and felt that their play had changed because of it.’ (Judy McKinty)

One student summed up the collective sentiment: ‘We do have a playground but when it was built the was no student opinions, so they built a playground so we could have something but there was no guarantee the students would enjoy it, because there was no consultation. We want a replacement not a substitute.’  (Rafi)

School leadership realised that in order for the children to form a strong connection to the new playground they needed to be included in its redevelopment. The decision was in keeping with the school’s aim to develop a strong community through ‘meaningful and authentic collaboration’.

This is how students became both clients and designers in a real-life design project: the redesign of a senior adventure playground; a subject where children are the experts. ‘Play is a big part of learning for us and that hour and a half we have to play outside is a crucial part of our day and even bigger part of our learning experience.’

The project was initiated in consultation with the whole school community and in collaboration with the school’s landscape architects, Urban Initiatives.

The project group collated responses to a school-wide survey which largely corresponded with their own views that a playground needs to provide physical challenges on different levels with loosely enclosed spaces to encourage social interaction, imaginative games and role play e.g. shops or the jail in cops and robbers. The children wanted a community of play.

Their designs were informed by research. The children were aware of playground design for safety when assessing their designs. Discussions were wide-ranging.

Expert mentoring by an architect parent supported the group in making a scale model. ‘We had to measure every tree in the area of the playground and find the length from the fence line. While some were measuring trees others were scaling the already measured trees. The scale was 1:50, so 50cm in real life equated to 1 cm in the model.’ (David)

Throughout Term 4 the Year 5/6 neighbourhood had been engaged in a Creativity inquiry. This inquiry culminated in an expo to present the Year 5/6 students’ learning. The Playground Redevelopment group presented their design project. They talked about the creative approaches they used to explore and communicate their ideas, and to deal with challenges.

The children had provided a progress report of their design project to the School Council AGM earlier in the year. Now it was time to convince School Council to support the rebuild.

The children at Princes Hill revealed how important their free play and playing spaces are to them and showed how strong, capable and creative they can be when they are listened to and taken seriously. ‘What started off as a project about the redesign of a playground ended up as a project around concepts of student voice, active citizenship and democracy.’  Sharna Upiter, teacher.

‘The project demonstrates what can be achieved when children are given the authority and the means to develop a project around a subject on which they are the experts.’  Judy McKinty – editor Play & Folklife N058, 2012 Museum of Victoria Journal.

And the children’s final word: ‘This is not ANY playground, it’s THE playground and we know it because we chose it!’